On the Iconography of the ancient Peruvian cultures

The available literature on ancient Peru reveals little about iconography. What is available seems neither well organized nor coherent. Furthermore, it can be seen that the studies on iconography focus only on individual cultures or on specific aspects of their artistic legacies. For example, special attention is accorded to the fine line painting of Moche on a variety of ceramics or the corresponding vessel paintings of  Nazca. Areas such as wall paintings and reliefs or textiles receive only a sporadic interest and relatively few attempts at interpretation. Lacking also is any comprehensive overview of the subject. There is no comparative description of all ancient Peruvian cultures over a period of two and a half to three thousand years, the time immediately before Chavín to the time of the Incas, and ultimately to the Spanish conquest of the country. Also, such a comparative analysis must take into account the different materials and techniques in the creation of these works of art.  This includes ceramics, metal objects, bone or wood, further reliefs in stone or clay, and paintings on different materials or even textiles. If it can be hypothesized that a plurality of objects of different types and provenance could have comparable or at least similar motifs, it may be advisable to incorporate these aspects in the examination.

It also might be fruitful to reflect on representations of the divine image across cultures and in relation to the different materials, techniques and artistry used in their design.  Another is the analysis of the impact of Chavín as the early dominant culture on the iconography. Ancient Peru, despite considerable topographic and climatic peculiarities can be viewed as a recognizable uniform entity. Spatial and temporal context must also be considered. The author has been working for decades with the iconography of the art of ancient Peru with respect to the aforementioned parameters. The result is a logical and stringent interpretation which proves that the message of this iconography over two and half millennia and in all cultures is the same. This interpretation offers clarification of the world of the gods of ancient Peru, a definition of religious content, and its influence on the formation of civilizations.

Introduction to the iconography of ancient Peru

Close examination of the iconography of the art objects of ancient Peru (textiles, ceramics, metal objects and other materials, and as wall reliefs and paintings) reveals mostly images with a complementary symbolism. These examinations focus on a period of about 3000 years, from about 1500 B.C. to 1532 A.D., and extend substantially across the relevant Peruvian cultures Chavin, Paracas, Recuay, Moche, Nazca, Tiahuanaco-Huari, Lambayeque, Chimú, Chancay and Inca.  They also include samples of many small cultures, as well as the today neighboring countries such as Ecuador, Bolivia, Chile and Argentina.

A clear result of such examination is that the divine image not only evolves stylistically over three thousand years (realistic, abstract, geometric, etc.) but also changes in relation to its various prototypes (zoomorphic, anthropomorphic, ornithomorph). Also, the very imaginative interpretations or representations of the respective artists have to be considered. The term artist is used intentionally because the representations are rendered with great artistic skill. Whether the weavers and the artisans were identic with the artists cannot be proven unequivocally.

All divine images are supplemented by symbols of earth and water which, in combination, represent the concept of fertility.  Both symbols represent the divine which, in company with the supreme deity, create the basis for the wellbeing of the people. The water god and the earth goddess are mostly presented as attributive symbols of the supreme deity. However many examples depict the water god and the earth goddess either singly or jointly symbolizing water or earth.

The symbolism of these two gods consisted initially of the step-shaped symbol of andenes (for the earth or soil) and the symbol of the meander or the wave (for water). The two symbols in combination form the step-wave. Chavín converted this symbolism probably for artistic reasons into the snake wave symbolism (snakehead and short snake body). In the Late Intermediate Period other symbols with the same meaning have been added: Curvy shapes with spikes, tassel-shaped objects in single or multiple form, as well as other different designs.

The step wave, the snake waver and the aforementioned other forms occur singly or in combination with the divine image of Chavín and all subsequent cultures. Here the diverse artistic variations have to be considered to allow their identification. These variations reflect on the representations of the gods, which are depicted in a variety of designs, including in hybrid beings. Here, in principle, it is assumed that these extremely diverse variants have only symbolic value and their sole purpose is to enhance the divine image.

From Moche to Chancay, and beyond, the seabirds are very clearly depicted in many presentations. These indicate that the seabirds, or coastal birds, obviously represented a sort of divine status because they were indicators of the devastating impact of the weather phenomenon “El Niño” on the abundance of fish. They are always shown in close connection with the divine image, because presumably they were considered as facilitating the return of the fish. However, a quite different meaning is ascribed to the Raptor, the bird of prey introduced by Chavín, which changed the feline god to a hybrid god and, in subsequent cultures, had significant influence on the design of the divine image.

The fertility symbolism as part of the divine image was essential to the religion proclaimed by the priesthood which gives credence to the slogan “Water to Earth.”. This obviously allowed the priests to influence water management and agriculture in ancient Peru, which in turn promoted abundant harvests and established the preconditions for a positive population development. Under these conditions, the various Peruvian ethnic groups were able to develop into major civilizations. 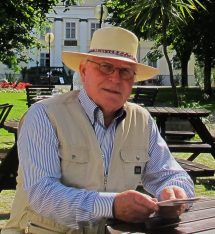 Uwe Carlson, Dipl.-Ing. (Civil Engineer * 1939) worked professionally in Peru in the 1970’s and 1080’s, gaining interest in the archeology of the country. During these years and during many later trips he explored, studied, and reflected on the country’s ancient cultures. He has since put forward a rigorous hypothesis for interpreting the iconography of the reliefs, wall paintings, textile and other art objects. In his interpretation, the divine images together with their accompanying symbolism bear a direct relation to the water management and cultural engineering of that time.

The divine image in Nasca culture (2018)

Other Publications and Presentations

The texts listed here have been published under respective conditions or presented at the specified events in the form of a lecture. They include as well some unpublished texts. Depending on the circumstances, they are not always available in three language versions. This also applies to presentation slides. The latter are essentially limited to pictorial statements. The supplementary written explanations have only a quoted character in the PPT versions presented here and therefore only describe the figures in a hinted manner. If necessary, additional explanatory notes can be found in the relevant publication texts.

Miscellaneous comprises written, briefed texts about individual aspects of iconography. This can be both important statements from the books and publications mentioned above,  which are clarified or further explained here. These texts are mostly explanatory observations on individual aspects. They relate in particular to comparisons and clarifications of content statements, as artistic interpretations, as special representations or as specific characteristics of different cultures. These texts may be in some cases subject to certain further processing. It should be noted that not all language versions are updated to the same extent at the same time.

The author reserves all copyrights. Copying and further use of the texts are permitted after prior written request. Partial use of texts or illustrations is permitted provided the source is acknowledged.